Great prince of the genii, you must know that we are three brothers–these two black dogs and myself. Our father died, leaving us each a thousand sequins. With this sum we all three took up the same profession, and became merchants. A short time after we had opened our shops, my eldest brother, one of these two dogs, resolved to travel in foreign countries for the sake of merchandise. With this intention he sold all he had and bought merchandise suitable to the voyages he was about to make. He set out, and was away a whole year. At the end of this time a beggar came to my shop. “Good-day,” I said. “Good-day,” he answered; “is it possible that you do not recognise me?” Then I looked at him closely and saw he was my brother. I made him come into my house, and asked him how he had fared in his enterprise. 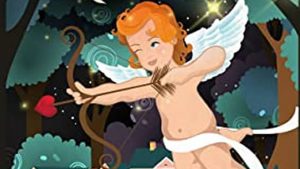 “Do not question me,” he replied, “see me, you see all I have. It would but renew my trouble to tell of all the misfortunes that have befallen me in a year, and have brought me to this state.”

I shut up my shop, paid him every attention, taking him to the bath, giving him my most beautiful robes. I examined my accounts, and found that I had doubled my capital–that is, that I now possessed two thousand sequins. I gave my brother half, saying: “Now, brother, you can forget your losses.” He accepted them with joy, and we lived together as we had before.

Some time afterwards my second brother wished also to sell his business and travel. My eldest brother and I did all we could to dissuade him, but it was of no use. He joined a caravan and set out. He came back at the end of a year in the same state as his elder brother. I took care of him, and as I had a thousand sequins to spare I gave them to him, and he re-opened his shop.

One day, my two brothers came to me to propose that we should make a journey and trade. At first I refused to go. “You travelled,” I said, “and what did you gain?” But they came to me repeatedly, and after having held out for five years I at last gave way. But when they had made their preparation, and they began to buy the merchandise we needed, they found they had spent every piece of the thousand sequins I had given them. I did not reproach them. I divided my six thousand sequins with them, giving a thousand to each and keeping one for myself, and the other three I buried in a corner of my house. We bought merchandise, loaded a vessel with it, and set forth with a favorable wind. 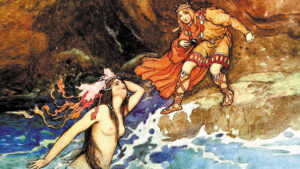 After two months’ sailing we arrived at a seaport, where we disembarked and did a great trade. Then we bought the merchandise of the country, and were just going to sail once more, when I was stopped on the shore by a beautiful though poorly dressed woman. She came up to me, kissed my hand, and implored me to marry her, and take her on board. At first I refused, but she begged so hard and promised to be such a good wife to me, that at last I consented. I got her some beautiful dresses, and after having married her, we embarked and set sail. During the voyage, I discovered so many good qualities in my wife that I began to love her more and more. But my brothers began to be jealous of my prosperity, and set to work to plot against my life. One night when we were sleeping they threw my wife and myself into the sea. My wife, however, was a fairy, and so she did not let me drown, but transported me to an island. When the day dawned, she said to me,

“When I saw you on the sea-shore I took a great fancy to you, and wished to try your good nature, so I presented myself in the disguise you saw. Now I have rewarded you by saving your life. But I am very angry with your brothers, and I shall not rest till I have taken their lives.”

I thanked the fairy for all that she had done for me, but I begged her not to kill my brothers. 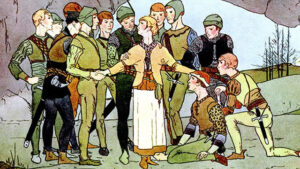 I appeased her wrath, and in a moment she transported me from the island where we were to the roof of my house, and she disappeared a moment afterwards. I went down, and opened the doors, and dug up the three thousand sequins which I had buried. I went to the place where my shop was, opened it, and received from my fellow-merchants congratulations on my return. When I went home, I saw two black dogs who came to meet me with sorrowful faces. I was much astonished, but the fairy who reappeared said to me,

“Do not be surprised to see these dogs; they are your two brothers. I have condemned them to remain for ten years in these shapes.” Then having told me where I could hear news of her, she vanished.

The ten years are nearly passed, and I am on the road to find her. As in passing I met this merchant and the old man with the hind, I stayed with them.

This is my history, O prince of genii! Do you not think it is a most marvellous one?

“Yes, indeed,” replied the genius, “and I will give up to you the third of the merchant’s punishment.”

Then the third old man made the genius the same request as the other two had done, and the genius promised him the last third of the merchant’s punishment if his story surpassed both the others.

So he told his story to the genius, but I cannot tell you what it was, as I do not know.

But I do know that it was even more marvellous than either of the others, so that the genius was astonished, and said to the third old man, “I will give up to you the third part of the merchant’s punishment. He ought to thank all three of you for having interested yourselves in his favour. But for you, he would be here no longer.”

So saying, he disappeared, to the great joy of the company. The merchant did not fail to thank his friends, and then each went on his way. The merchant returned to his wife and children, and passed the rest of his days happily with them.

“But, sire,” added Scheherazade, “however beautiful are the stories I have just told you, they cannot compare with the story of the Fisherman.” 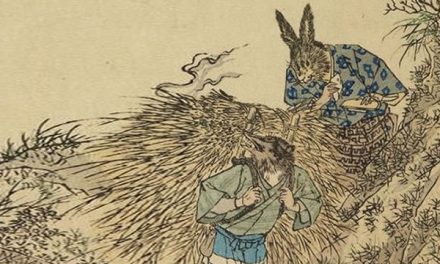 The Farmer And The Badger (Japan) 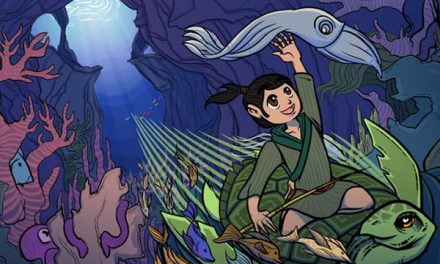 The story of Urashima Taro, the fisher lad (Japan) 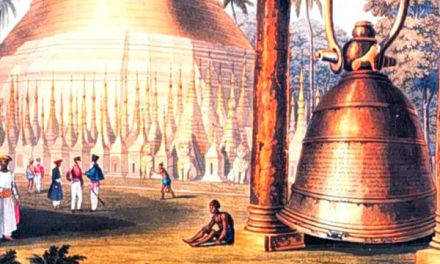 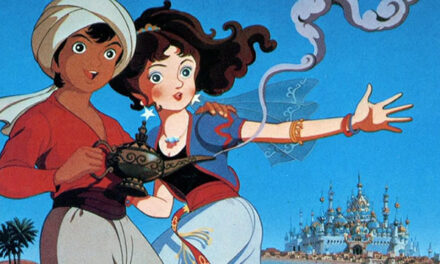